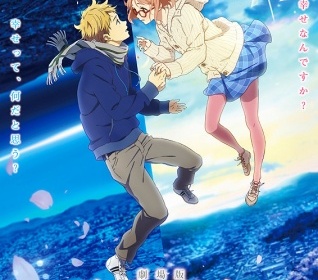 After months and months of PVs and waiting, finally it’s been subbed and released! The movie continues from where the anime left off, showing the effects of everyone’s encounter with the Beyond the Boundary. The movie really ties everything together and it even warps up the overall story VERY WELL. The animation is absolutely breath taking, Kyoto Animation probably pushed their budget to the limit for this one (if they had one at all…). The emotional build up was done quite well, the scenes with the complicated situation between Akihito and Mirai really get those tears flowing!!! The emotional roller coaster is backed up with intense fighting scenes with very smooth animation (much like in the anime but MUCH MUCH BETTER). The sound for the movie is very impressive with the use of white noise to amplify the characters thought and emotion. Although I will say one thing…..at times during the movie, some of the characters would be pushed back causing them to hit and roll across the ground…But the sound effect didn’t really match? It sounded very light, like it was just a tap rather then a loud “THUD” to emphasize the impact. But that’s just me nitpicking at things, overall the movie was a great ending piece to the series and I’m waiting to see the next masterpiece Kyoto Animation dishes out next!