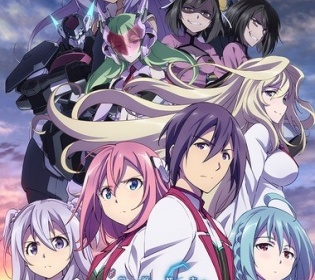 “Long, long ago, an epic catastrophe, known as Invertia, caused a complete change in the world’s power balance. In the years following this disaster, a group known as the Integrated Enterprise Foundation rose to power. In addition to this massive change, a new breed of humans born with amazing physical skills known as Genestella also emerged and joined the ranks of humanity.” -myanimelist.net

Asterisk War is back with another season and continues from where season 1 left off! Season 2 covered a lot of material, from the entirety of the Phoenix Festa to the introduction of the Gryps Festa! And between the two were some much needed character development for our main cast and then some! Asterisk War Season 1 is known for its great animation and soundtrack. Season 2 the soundtrack still blew me away but the animation is a little lacking. There are little details that didn’t have enough attention put into them. But seeing the last episode’s fight scene sort of made up for it. Season 2 introduces many new characters that will be important later in the story. Each of which have a lot of potential character development for the little screen time that they had. Season 3 HAS NOT been green-lit YET but there is no doubt that it will be coming (AND HOPEFULLY SOON!).