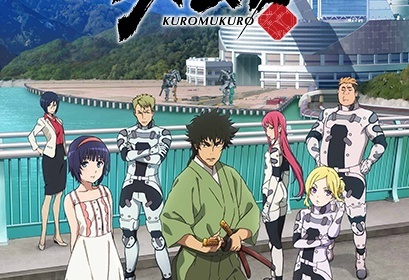 “During the construction of the Kurobe Dam, an ancient artifact was discovered, and so the United Nations Kurobe Research Institute was established. Intellectuals from all over the world gathered to study the object, and the children of those researchers attend Mt. Tate International Senior High School, including the Institute head’s daughter, Yukina Shirahane. In the summer of 2016, a lone samurai once again awakens.” -ANN

Kuromukuro was a hyped up anime since P.A. Works would be the studio to animate it, however, it didn’t have the impact that we thought it was going to have.

A Very complicated story that starts off with finding a samurai who survived the passage of time inside of an extraterrestrial box. That same samurai fights against the “Demons” which are dinosaur shaped robots. And all of this is to avenge his fallen princess, who just so happens to look EXACTLY like our main heroine. This futuristic samurai type style is cool but it’s hard to make it work. The only futuristic samurai anime I’ve liked so far is Gintama, but that’s top tier. And the ending was just an excuse to end the series, it was great that all of them worked together to help Ken but, why did the UN have security measures against the heroes that helped them survive? Why were they a threat when all they wanted to do was to go and fight the Efidolg. Illogical, in my opinion, not to mention the fact that Yukina and Sophie both go help Ken BUT how much of that can be used to make another season?

Character designs were enough to get the job done. It’s really black and white. The Mechs weren’t that great either, it’s sort of ambiguous on how they work, with just a panel in front and you place your hands on the panel and it moves. Gundam does a much better rendition of how a giant mech would work, heck even Robotic; Notes. What I liked about the art were the background and scenery images. those were fantastic. The design of the research facility and its structure had a nice aesthetic. Nice views of the hillside and dense forest when Yukina went to look for clues about her dad.

The Opening themes are pretty catchy and EDs are good powerful songs to open and end the show. The OST in the story isn’t quite as memorable.

There were some parts in the story that I enjoyed but most of the time it was me groaning to all the predictable outcomes. I wouldn’t recommend this one, it’s just not that great

Super generic, but not too awful. I’m sure this would be appealing to someone who’s still starting to watching anime but as a long time watcher, I feel like Kuromukuro is very redundant and uses too many cliches.