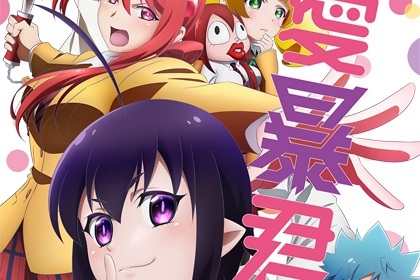 “When a strange girl named Guri comes knocking at Seiji Aino’s door, he quickly finds himself thrust into a world of romantic troubles. Claiming that she will die if he doesn’t kiss someone within 24 hours, Guri’s pleas of desperation are misunderstood as pleas for love, leading Seiji to kiss the cute stranger that came barging into his house. In actuality, it turns out that this cosplaying cupid is the wielder of a Kiss Note, in which any pairing of names she writes will kiss and become a couple. Guri explains that she misspelled and accidentally wrote Seiji’s name while indulging in her yaoi fantasies, but because she had yet to pair him with anyone, their kiss was meaningless. Even worse, Guri reveals that if Seiji is not coupled with anyone soon, not only will she die, but Seiji will remain a virgin for eternity!” – MAL Rewrite
What looked interesting at first, quickly became a mesh of ideas that don’t correlate nor does it make a cohesive story.
————————————————————————-
Story:
While the Kiss Note played an important within the first few episodes of the show, it’s forgotten because of everything going on. With so many plot points are jammed packed into a mere 12 episodes, it’s very difficult to digest everything and enjoy the show. With little to no filler moments at all, the pace of the anime is much too fast for the audience to know and understand each character. Sure, we get some moment of flashbacks or character development but it isn’t enough. The comedy wasn’t too bad, but the arcs in the show were all too close to each other that it was hard to immerse my self into the anime.
Artwork & Animation:
Both artwork and animation both fall flat for me. They get the job done, but it could’ve been better.
Character(s):
The characters and their inconsistencies were one of the worst things in the show, especially Seiji. Seiji from the beginning is the kind protagonist that puts himself in harms way to protect the things he cares about, yet when Guri disappears he doesn’t care. It’s like he was a different character and that doesn’t appeal to many people, especially when it’s the main protagonist. Shikimi is also a very shallow villain, so to speak. Her motivation? I can’t have it, so I’m going to take it for myself. A child who does bad things because she can’t have it, and to see such a childish character is infuriating.
Sound (OST & Voice Acting):
It was interesting to see that Wake Up Girls preformed the opening for the show, though I have no idea why an anime idol group who already have their own anime would preform for another anime show. I guess EGOIST do the same thing, but still very uncommon.
Enjoyment:
I enjoyed it for what it was, but compositionally it was a major wreck.
Overall: score 4
With an intriguing plot that gets swallowed up in redundant gags, shallow characters, and plain artwork, Renai Boukun is an anime that will entertain you for the first 3 episodes. After that it’ll be hard to want to continue on.