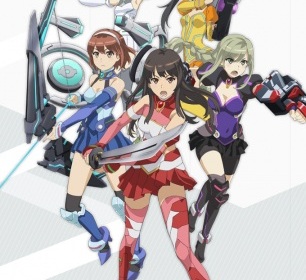 “Goryōkan Academy is a new private senior/junior high school for girls with a vast downtown campus. This highly popular school has “another face” — a secret hidden side. It organizes and trains the special unit, Fifth Force, to protect the world from invisible supernatural entities known as “Oburi” that are devouring the world. A team of five trained with powers against the Oburi is to be chosen from the student body to perform missions. A new team leader has been appointed to assemble the five students.” -ANN
Schoolgirl Strikers: Animation Channel is based on a Japanese mobile game by Square Enix, and it’s popular resulted in an anime adaptation! Although I have yet to play the game myself, I’m was pulled in by the A-list cast of voice actors such as Sawashiro Miyuki (Sinon from Sword Art Online) and Hanazawa Kana (Onodera from Nisekoi).
————————————————————————-
Story:
I’m assuming the story breaks off on its own rather than follow the game itself since that’s what how it usually works when being adapted from mobile games. The story is a lot more complex than you would think. The first half of the show is about the daily lives of the girls and what that go through on a day to day basis such as training, going to school, having fun etc. The second half has much more story development and quite a few unexpected plot twists. It’s worthwhile to see what this show has to offer, it might not be the best show but it’s fun to watch.
Artwork & Animation:
Character designs by Tanaka, Yuuichi (Toaru Majutsu no Index) are top notch. The animation is has a kick but not quite enough to make your heart race. Although if there’s one thing to talk about, it’s the wonderful backgrounds. The locations that the girls visit in the 5th dimension are vast and they vary depending on the dimension. Each has its own characteristic so there’s always something to look at.
Character(s):
Most of the characters stay static throughout most of the show. There are only a handful of characters that get real character development, who won’t be named due to potential spoilers. And that doesn’t happen until the last two episodes. It hits you all in one shot, making it difficult to grasp the information within a meager 2 episodes.
Sound (OST & Voice Acting):
I did say that it had an A-list Cast, but it felt like there was a lack of motivation of some sort. This is especially true in the last battle scene with the fight against Morgana. Morgana’s cries of pain were more like deep long sighs from sleep deprivation. Ruining the tension and mood of the entire scene.
Enjoyment:
With such great character designs and with some of my favorite voice actors as cast members it was a blast to watch. Although it got sort of tedious to watch toward the middle, the second half brought back the hype for me to finish it!
Overall: Score 8
Schoolgirl Strikers: Animation Channel as a mobile game adaptation is an interesting and fun show. Although its lack of character development and its animation is a bit of a bore, it makes up for artwork such as its character design and backgrounds.