Hitori no Shita: The Outcast [Review] 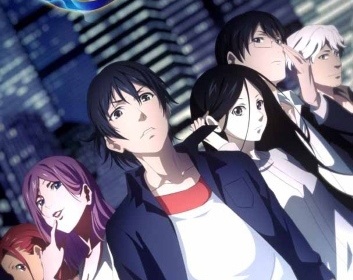 “One day, on his way to visit his grandfather’s grave, Zhang Chulan is attacked by zombies in a graveyard. In the midst of that situation, he is saved by a mysterious girl, who wields kitchen knives in order to kill the enemies. The girl tells Chulan, who is relieved, to face his hardships head on and leaves. However, Chulan later sees that girl again at his university. From that moment, Zhang Chulan’s destiny begins to move. There will be strangers with special powers appearing one by one, with battles involving those abilities. Each episode will bring a new mystery to light.” -MAL
Looking through the lists of anime that I needed to watch and this has been stuck in the “on-hold” for some time, so I decided to get it out of the way. I was curious about Hitori no Shita because of the studio that was animating it. Hitori no Shita is Namu Animation’s first production so I was intrigued to see what the studio had to offer.
————————————————————————-
Story:
Based off of a Chinese Web Manga, I didn’t have high hopes when watching the first episode. Hitori no Shita starts off as a very strange and uninteresting anime, but as you continue on it gets more intriguing. The plot revolves around different styles of martial arts and the use of ki. Though a lot of the names get lost since there’s not a good explanation for each of the distinct styles. Not to mention instead of ending the season on a high note, they end it was a 2 episode flashback. Sure it foreshadows season 2, which has already been announced to be in production, but for a show that focuses on martial arts, it needs more energy.
Artwork & Animation:
The animation is very choppy, and the artwork is quite bland. Another negative is when it became localized for the Japanese audience, the final episode, which was supposed to be a 40-minutes season finale, is only a mere 24-minutes. A lot of bloody scenes were cut out of the episode. Which is disappointing, to say the least.
Character(s):
Even after watching the entire show, the only character that I even remotely like is Houhou. All the other characters get close to zero character development. Chulan does get some but even then, as the main character he is not that interesting.
Sound (OST & Voice Acting):
The Japanese dubbed wasn’t too bad, but the fact that there were a lot of Chinese names being thrown around it made things a little confusing. I would’ve preferred to see the Chinese dub, but there has yet to be an official translation for it.
Enjoyment:
To be honest, it got pretty interesting at the end, but the half was so painful to watch.
Overall: Score 5
Hitori no Shita The Outcast has a somewhat interesting plot, choppy animation, and bland artwork. But with as many flaws as Hitori no Shita has, it’s still interesting and I hope that the next season will fix them. With better animation, more character development, and hopefully a more competent Chulan.

tagged with Anime review, Hitori no Shita: The Outcast, hitorinoshita - The Outcast, Kiritoreviews, 一人之下 THE OUTCAST