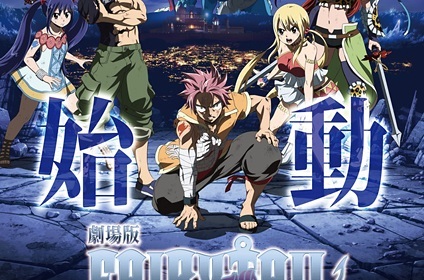 “Dragon Cry is a magical artifact of deadly power, formed into a staff by the fury and despair of dragons long gone. Now, this power has been stolen from the hands of the Fiore kingdom by the nefarious traitor Zash Caine, who flees with it to the small island nation of Stella. Frightened that the power has fallen into the wrong hands, the King of Fiore hastily sends Fairy Tail to retrieve the staff. But this task proves frightening as a shadowy secret lies in the heart of the kingdom of Stella. Dragon Cry follows their story as they muster up all their strength to recover the stolen staff and save both kingdoms.” -MAL Rewrite
It’s here! The second Fairy Tail movie that will prep us for what’s to come in the final season in the Spring of 2018! And of course, I had to get my hands on tickets to watch this in theaters for the full experience!!
————————————————————————-
Story:
Natsu and friends are back together to tackle yet another mission that takes them on an adventure that they never expected. The movie occurs a little bit after the guild gets back together, something the anime has yet to air. So it’s safe to assume that the beginning of the Spring 2018 anime will fill in the gap between the ending of the season in 2014 and the movie. Overall, the plot line is very strong and enticing, however; the constraints of a movie format is its downfall. A lot of fight scenes were shortened to about two or three attacks which made them anti-climatic since the fight scenes in the Fairy Tail we all know and love is very detailed, powerful, and long.
PS* There is a hidden scene after the credits, be sure to stick around to the end!!!!
Artwork & Animation:
Both artwork and animation blew me out of the water. There were mixtures of both 3D and 2D animation and the 3D wasn’t too overwhelming. It’s a nice gray area that highlights the ability and skill of the animation studio.
Character(s):
Villains are super important and I love powerful villains that have their own sense of justice. But Sir Zash is quite the opposite, a pathetic antagonist to say the least. His motives are cliché and simple, I want to destroy a country because they did me wrong. And he goes down with nothing but his own stupidity. Fortunately, there is a redeeming character that makes the movie worth watching, Sonya. Although she is very quiet and there is still a lot of mystery that surrounds her. The backstory that supports her is complex and powerful, which leads to a lot of shocking plot twists! We also get to learn a little more about Natsu’s true nature.
Sound (OST & Voice Acting):
The return of the fairy tail soundtrack had me pumped from the beginning to the end! The powerful violin playing the Fary Tail theme song had my blood pumping for action. The ending theme for the movie was very catchy as well.
Enjoyment:
Being able to watch it in theaters made it a lot better than if I were to watch it on my laptop at home, so that was a factor. But overall, there were a lot of light hearted scenes but also powerful ones that had me laughing and crying at the same time. Definitely, a must watch if it shows in your area!
Overall: Score 9
Although the villain in the story wasn’t as significant as most hoped he would be, the powerful story, the amazing artwork, as well as soundtrack, makes up for it! Fairy Tail is back and ready to take over the anime fandom once again with a brand new season coming soon in Spring 2018!