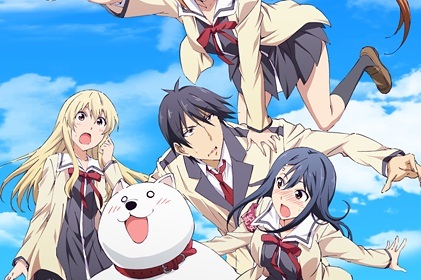 “Yoshiko Hanabatake is an idiot beyond all belief. Somehow managing to consistently score zeroes on all of her tests and consumed by an absurd obsession with bananas, her senseless acts have caused even her own mother to lose all hope. Only one person is up to the task of keeping her insanity in check: childhood friend Akuru “A-kun” Akutsu.” -MAL Rewrite
Aho girl is definitely one of the favorites coming into the season and it didn’t disappoint! It’s the best comedy of the season, if not year!
————————————————————————-
Story:
With anime like Aho Girl that focuses on the characters and the comedy, a large plot-line isn’t needed. The episodes last around 12 minutes and usually encompass around two or three segments. The story depicts the everyday life from Yoshiko’s, and Akutsu’s, point of view.
Artwork & Animation:
There are similar character design elements between Aho Girl and Mangaka-san to Assistant-san to, being that they both have the same creator. The artwork and animation are top-notch for the genre that the show belongs in.
Character(s):
Yoshiko brings a new level of “unintelligent” to the table. Most of the time, the “not-so-bright” characters tend to be annoying, but Yoshiko’s non-sensible actions always hit a funny bone and there’s no stopping the laughter after that. Akutsu or “A-kun”, plays the straight man and, oh boy, does he do a great job. Sometimes even using physical violence to silence the loud Yoshiko!
Sound (OST & Voice Acting):
The voices for the show were beyond hilarious, the voice actors went above and beyond pushing the seriousness or silliness of a situation and bringing the comedy from a 10 to an 11. The entire cast did a wonderful job! The opening and ending themes were fantastic and took on the character of the show!
Enjoyment:
This show became a masterpiece the minute the bananas began flying across the screen during the opening animation.
Overall: Score 10
With a great assortment of characters, Yoshiko in general, and amazing comedy, Aho Girl becomes one of the funniest shows I’ve seen to date. Easy recommend for both veterans and new anime fans!