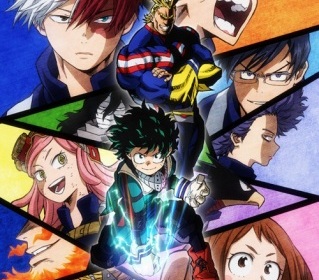 “Taking off right after the last episode of the first season. The school is temporarily closed due to security. When U.A. restarts, it is announced that the highly anticipated School Sports Festival will soon be taking place. All classes: Hero, Support, General, and Business will be participating. Tournaments all round will decide who is the top Hero in training. Wills and strengths will be tested, as weaknesses will be overcome in this new season of My Hero Academy.” -ANN
Wow, a second season with an actual synopsis that isn’t “Second season of [insert anime name here]”. Well anyway, Boku no Hero has made a name for itself not only in the anime but also in the manga as well. There are many story elements included in the second season and with season three already announced, the hype for it will continue to build!
————————————————————————-
Story:
Lots of key story elements were revealed here in season two and all which foreshadowed a grim future. Season two encompasses three arcs: The Sports Festival, Hero Internships, and the Practical Exam. Each arc was full of character development as well as high energy fight scenes. The story continues to build around Izuku Midoriya and his quirk One-For-All. The story is well paced for how much content the season contained.
Artwork & Animation:
The artwork and animation continue to impress as they showcased each character’s quirks and fast-paced fight scenes. And the animation shines in simple animations like characters running or jumping.
Character(s):
Everyone got a little bit of something this season but the main focus was one Izuku and All Might, of course. Although, we still got a good amount of screen time for Ochaco, Todoroki, Iida, Tsuyu, and Bakugou. Class-A is rich and full of character making it enjoyable to watch even if the story doesn’t follow Izuku all the time.
Sound (OST & Voice Acting):
amazarashi isn’t known for big high energy openings but they did a great job with the opening theme. The ending featuring the girls of Class A was a nice surprise as well! The soundtrack consisting of a lot of dramatic orchestral pieces up the emotions whether it was a sad or dire moment.
Enjoyment:
Beginning to end was a huge roller coaster ride for me. I was screaming my cheers for Izuku so loud that I had my roommates worried about me each week.
Overall: Score 10
Boku no Hero Academia continues to impress, pumping out great character, developing the story, intriguing foreshadows, and good artwork! And season 3 is already on the way so we won’t have to wait that much longer!!