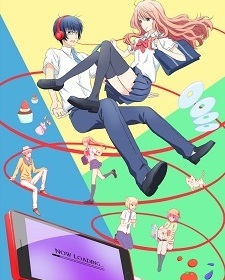 I’m was actually super excited to start watching this one, it has been a while since I’ve seen a RomCom and the artwork doesn’t look that bad at all from the promo art!

Tsutsui is a genuine and bonafide otaku who, of course, despises 3D girls (aka real-life girls for you normies out there). He is late to school and is forced to clean the pool along with another late student, the absent-minded Iroha. As they clean the pool an accidental slip brings them both tumbling into the pool (it’s so cliche it hurts).  After that, they help each other out seeing as they are both socially awkward and those acts of kindness begin to blossom into something that both of them never would’ve imagined they would be feeling.

Well, let’s just say I wasn’t too impressed with the first episode. The story is very interesting and the character designs are really nice. But the animation is very choppy, the story is much too fast, and I have a hard time warming up to the characters. It might get better as the story progresses but as of right now… the future isn’t looking too bright.