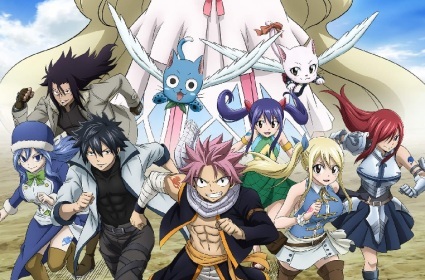 The final season of Fairy Tail

Ohmygodohmygodohmygod!!! I’M NOT FREAKING OUT, YOU’RE FREAKING OUT!! *ahem* Sorry lost my composure for a second there…but yes, you heard right! Fairy Tail is finally back for its final season. The art and soundtrack fill me with nostalgia and man does it feel good! The somewhat uneasy intro has me a little worried about what’s to come (I have no idea since I refuse to read the manga in case of spoiling everything for myself) so it’ll be an interesting development.

It’s an obvious choice for any fan of Fairy Tail, it’s the last stretch! As for those who haven’t seen it…it’s time to start! You’ll have to marathon the anime listed below before even thinking about starting this one!

Fairy Tail Movie 1: Houou no Miko (Watch this right after episode 124ish but before the Magic Games Arc)

And then you’ll be ready in no time to join us!