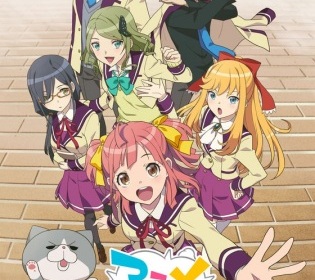 “After dreaming about an anime she used to watch as a child, Minoa Asagaya could not forget a particularly memorable scene. However, despite her best efforts, she cannot recall the name of the show. Due to this, Minoa asks for help from her fellow classmates at Sakaneko High School. Her conversation is overheard by Arisu Kamiigusa, the most popular and wealthy girl in class who is also a hardcore otaku. Yet even with her vast knowledge, Arisu does not recognize the show. After discovering that there isn’t an anime club at their school, Minoa and Arisu create the Anime Research Club, as they may obtain the answer to Minoa’s mystery if they gather people who share the same interest. Thus, Minoa is exposed to a bizarre new world—the world of anime!” -MAL Rewrite

Story:
Animegataris is all about, don’t be surprised, ANIME! The amount of references is impressive, to say the least. Veteran anime watchers will appreciate the reference while newer anime watcher will learn the fundamentals of anime as a whole. While the first half is what you would expect, comedic school-life all about anime, the second half does twist things up a bit so keep at it!
Artwork & Animation:
Ironically, with the show being about anime…the art quality wasn’t that great. The animation is quite choppy throughout the show. I do appreciate the shift in art styles in the second half, along with the quirky animation (which I’ll refrain from talking about to avoid spoiling anything.) Use of CGI for certain scenes was actually good! I did enjoy the character designs of the show overall, which is best shown in the ending animation.
Character(s):
There isn’t much character development in Animegataris, it’s a “what you see is what you get” most of the time. There are exceptions but I’ll refrain from any spoilers. There is development with the anime club as a whole and it does get interesting but the development takes a weird turn towards the second half losing a lot of its momentum for the final scene resulting in a cliche and cheesy ending.
Sound (OST & Voice Acting):
Garnidelia’s “Aikotoba”, the opening theme for Animegataris, was very unexpected! I didn’t think Garnidelia would make a song like but I’m definitely not complaining! The soundtrack is a big homage to your favorite school setting anime, it’s great in the sense that it’s the same as any other soundtrack. But it’s a double-edged sword as it’s also predictable.
Enjoyment:
Animegataris had its ups and down, but I enjoyed the anime references and concept of the show so much that the flaws were easily brushed off. I do wish that the execution was a little cleaner but what can you do.
Overall: Score

With an interesting take on the school-life genre and a wide range of anime references and clichés, Animegataris will teach you the ways of the anime culture! As for Veterans of anime well, there’s plenty of references to classics and recent anime for laughs and giggles!
Best Girl: Kouenji Miko
Being a writer myself, I can relate to Miko in a lot of ways but I think her reactions to certain situations had be laughing the most compared to the rest of the cast. Not to mention that glasses, long black-hair, and a large “PLOT” are my weakness…