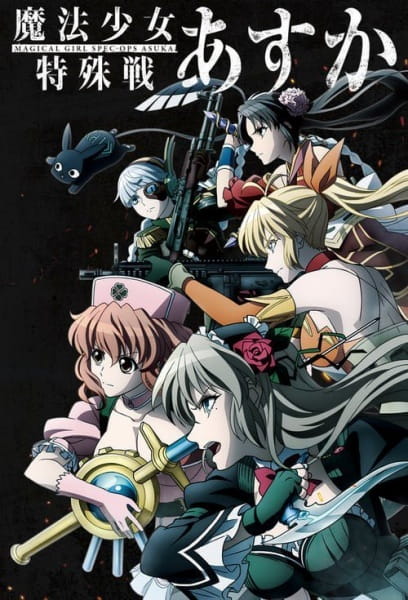 Due to the invasion of Disas—enigmatic creatures of soil from the land of the dead—mankind, who was on the verge of crisis, was saved by the efforts of magical girls who had obtained a mysterious magical power…Three years later, new incidents suddenly occur, tearing apart the normalcy of the girls who had each returned to their normal lives. The saviours of humanity, those magical girls called “The Magical Five” now live each day fighting for their lives, even as they are trifled with by fate…” – Mahou Shoujo Tokushusen Asuka (manga)

Story:
Have you ever thought of what it would be like if Mahou Shoujo (Magical Girl) attacks did actual damage to things? Well, look no further, as Mahou Shoujo Tokushusen Asuka will show you exactly how it’s done and it’s as more brutal than you would think! The world building throughout the show is great, the show establishes three different factions: the spirit world, the human world, and the Disas (giant stuff animals of death). One of the powerful points in the show is the political system and how it works between the three worlds (more like two because Disas just want to kill everyone, but you get the idea).
Artwork & Animation:
While the character designs look great, there are some characteristics of the designs that bother me, such as the eyes and how blatantly plain they are. It makes all the characters look dead on the inside, which could or could not be the intention.
Character(s):
There is a good amount of character development for the magical girls, being the mascots of the show, as well as some side characters that the girls befriend. The rest of the cast, however; doesn’t get as much attention and that hurts the story a bit. It tends to breaks the immersion because we know so little of the Disas and the spirit world.
Sound (OST & Voice Acting):
First off, the opening is so explosive and dynamic and the mixture of edgy guitar riffs with the powerful synths make a killer combination. The soundtrack is as dynamic as the opening featuring intense electronic tracks, grungy guitar tracks, and also piano pieces for the more slow and intimate scenes.
Enjoyment:
At first, I thought Mahou Shoujo Tokushusen Asuka was going to be another terrible dark anime. But it surprised me with its storytelling and character development to the point where I started to love the show. It’s not perfect by any means but it’s a good show to watch!
Overall: Score

Mahou Shoujo Tokushusen Asuka will blow your mind with its hardcore setting and brutal gory scenes. The rough artwork and animation do drag the show down a bit but not enough to make the show boring. The dynamic storytelling and powerful soundtrack will keep you invested and wanting more.

Best Girl: Ootorii Asuka
As the poster girl of the show, it’s obvious that Asuka would get a lot of screen time. But besides that, Asuka is truly a wonderful character. Her demeanor and the way she treats others, all the while being a magical girl make her one of my favorites to watch the show.