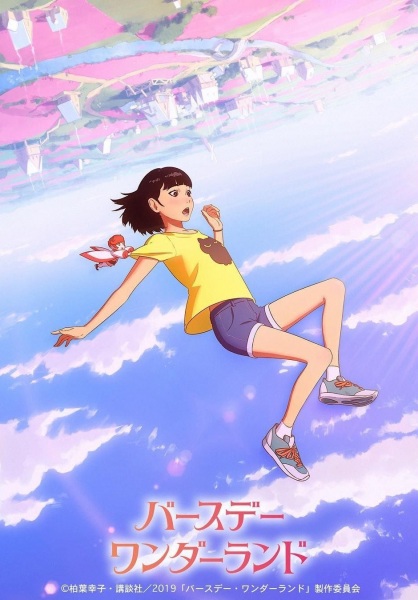 You could say that the story is a different way of telling Alice in Wonderland. Follow a stranger into a dark tunnel and explore the exotic wonderland. While the concept is simple the execution is very complicated. In fact, the story starts to get really busy with all of the plot points but with no real substance between the beginning, middle, and end. There is a lot of disconnect between plot points and that creates moments where I had to stop and think about what just happened.

The artwork and animation are as beautiful as you can imagine. There’s a Studio Ghibli aesthetic that can be seen, although not executed quite as neatly. The main cast looks great and their movements and gestures really pop throughout the movie, which can’t be said for the other characters in the movie. The side characters are simplified, to the point where it was blatantly obvious that the animation crew didn’t spend enough time on them. While the background concepts were fantastic, the animation took some shortcuts. In the scene where Chii and Akane take the car through the mountains, the trees along the mountain were 2D objects that were simply animated to shrink along the road as the car drives by. There was no movement or more keyframes to the tree, just one image.

For movies like this, the characters are really important in engaging the audience and putting them in the protagonist’s shoes. Personally, I found it hard to have a grasp on any of the characters at all. Hippocrates, for example, appears out of the blue and drags Akane into the World Beyond. We understand that he is an alchemist, that he seeks to save the world with the “Green Goddess”, Pipo is his apprentice, and that he has a workshop where he makes potions and other items. There’s nothing that really ties him into the world and he just seems to floats around in the story. The same can be said about Akane and Chii. Yes, we have a general idea about their origin and who they are but what exactly intertwines them with this world. Some information that we are given could be wiped from the story and we would still get the same movie. The biggest let down of the show was the motive of the antagonist, which is more of a fit thrown by a child. In the end, the story lacked impact and finished on a very unsatisfactory note.

If there’s one thing that I really loved about the movie, it’s the amazing soundtrack that filled the movie with colors and emotions. I was surprised to see “The Show” by Lenka in Japanese at the ending of the movie. Quite a throwback as that song debuted back in 2008! milet, the artist that performed both the opening theme and ending theme for the movie did a wonderful job and I’ll be looking for her name in upcoming shows and movies. The rest of the soundtrack features both powerful and graceful orchestral songs, which fit extremely well within the plot.

I did enjoy the movie quite a bit! The thing that bothered me the most was the fact that I had to pause my brain to think through the plot and make sense of everything…

Birthday Wonderland, while conceptually beautiful, misses the mark with the execution. Lack of attention to side characters, background animation, and a more fully developed storyline creates a movie that is enjoyable to watch..but only once.

The most free-spirited characters within the cast, yet also the most logical. Chii creates a fun atmosphere to help push Akane along in her journey to save this strange world. Her antics and compassion create both entertainment and relatable throughout the show.