Posted on March 8, 2020 by KiritoNarukami 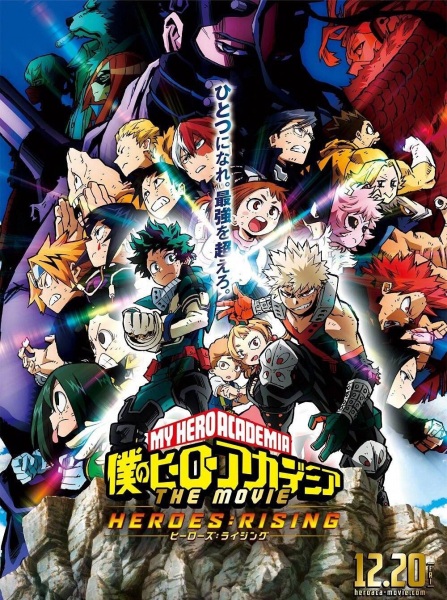 I was quite surprised when the movie started playing. The movie takes place a bit farther into the story than there the anime currently is (and as of the time this post is up, the newest BNHA episode is 21 of Season 4) which completely threw me off. For a movie, the plot is substantial enough to keep me satisfied. Katsuma being a focal point of the movie felt developed enough to actually be its own story at some point! I’m not saying that it should, just saying that there’s enough…

Heroes:Rising is canon yet not canon. Similar to the first movie, the event of the movie will never be mentioned in the anime or the manga. While Nine and the island safety exercise is mentioned in the manga, it’s not thoroughly talked about. Below is a statement from Funimation:

“The movie is not canon to the manga storyline. It’s an isolated story. But it was written and supervised by the manga’s creator: Kohei Horikoshi.”

Essentially, the movie is a conceptual ending (an idea that Horikoshi-san came up with). While the mangaka did write this ending, this isn’t actually the ending, it’s a fanfiction made by the mangaka, a what-if situation.

As you can imagine, the artwork and animation of Heroes:Rising is Plus Ultra in every aspect. The beautiful color pallet and the refreshing scenery of Nabu island give new life to the beloved franchise. Every single fight scene literally had me tense all over, each was exhilarating in their own way.

While Deku is the main character of the show, the movie focuses on the entire group of Class A-1 for the movie, which was the right decision! The whole class gets their time to shine, although Bakugou and Deku take a little bit more of the spotlight.

The timing of the entire soundtrack was immaculate. For me, the music can make it or break it for scenes and I was not disappointed. The soundtrack did a wonderful job of incorporating the songs that we all know and love as well as some new ones just to keep things fresh.

The movie, as a standalone, is a great side story! Although if the story was actually part of the storyline, I would have so many mixed feelings! But overall, I thought the movie is really fun to watch and I hope that this isn’t the last movie that BNHA puts out (but from all the things I’ve seen from other sources…it might be).

A side story that has no direct correlation with the main storyline, Boku no Hero Academia Heroes:Rising goes Plus Ultra with intense articulate fight scenes and menacing villains that’ll have you at the edge of your seat from beginning to end.

Let’s be honest…this isn’t going to be changing for me anytime soon! Uraraka looks cute in every scene, even the part where she barfs!