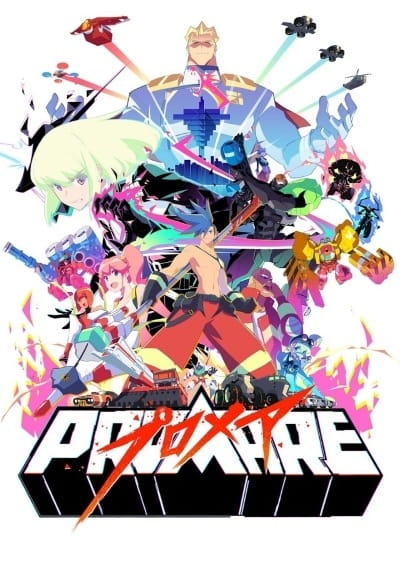 With each successful Trigger production, there is always a really strong theme that is held throughout the story. In Gurren Laggan, it was the drill, and in Kill la Kill, it was the fiber. Promare’s theme focuses on the idea of fire and how fire is the source of both life and death. The story progression is excellent and allows ample time between the climactic scenes to introduce character development as well as “rest scenes” where the characters simply live their lives. Seldom do we see such a well-paced movie that gives a little to every character in the movie.

CGI has never been a favorite of mine and rarely do I ever praise it, but when I do, it’s done extremely well. Promare’s excessive use of geometrical elements in both 2D and CGI elements creates a brilliant relationship between the two mediums, presenting a seamless blend that is as eye-popping as you can imagine. And to wrap the entire package in a nice bow, the stunning bright neon color palette will have you dropping your jaw at every scene.

As the stars of the show, Lio and Galo create a wonderful dynamic and enriches the already eccentric atmosphere of Promare. While not often in the spotlight, the side characters each get their moment to shine as they work together. One of my favorite little references within the show is the Matoi. The Matoi that Galo uses in battle, fun fact of the day, is a homage to the Matoi that Japanese firefighters in the 18th century used for identification (and not for fighting like Galo lol). A great reference to the culture that not only brought about Promare but also Fire Force (but that’s a topic for another day).

Hiroyuki Sawano has been one of favorite composer since I first heard it in Guilty Crown so this section may be a little biased, but who’s counting? The power and command that each song has is astounding and never fails to amp up each scene. The use of taiko drums hints back to Japanese culture (similar to the Matoi) and further blending it with both orchestral instruments and some electronic distortion and you’ve got some intense suspenseful scores! Sawano’s unorthodox use of instruments also introduces us to new sounds and forces us to feel certain emotions, as he intends. It’s a really long topic about sound design and composition but that’s also a conversation for another time!

I had the chance to catch the movie in theaters in the U.S. back in 2019 but never had the chance to sit down and write my thoughts! I love every minute of Promare and I’m really glad that Trigger is going back to their wackier art style!

The epitome of Trigger production: the flashy animation from both Kill la Kill and
SSSS.Gridman, paired with the powerful storytelling from Gurren Laggan comes
Promare Trigger’s first full-length film. You definitely don’t want to miss watching this one!

It was a hard decision between Aina and Lucia but at the end of the day, I went with Aina. Her caring personality and spunk really made the movie both interesting and relatable. The down to earth personality amidst the eccentric cast is a great balance and without her, the movie would not have been as successful.

Ah but I can’t completely forget about Lucia either! Her mad scientist vibe and fast animations made for enticing scenes! Not to mention, I love her voice actor as well (Shintani Mayumi)