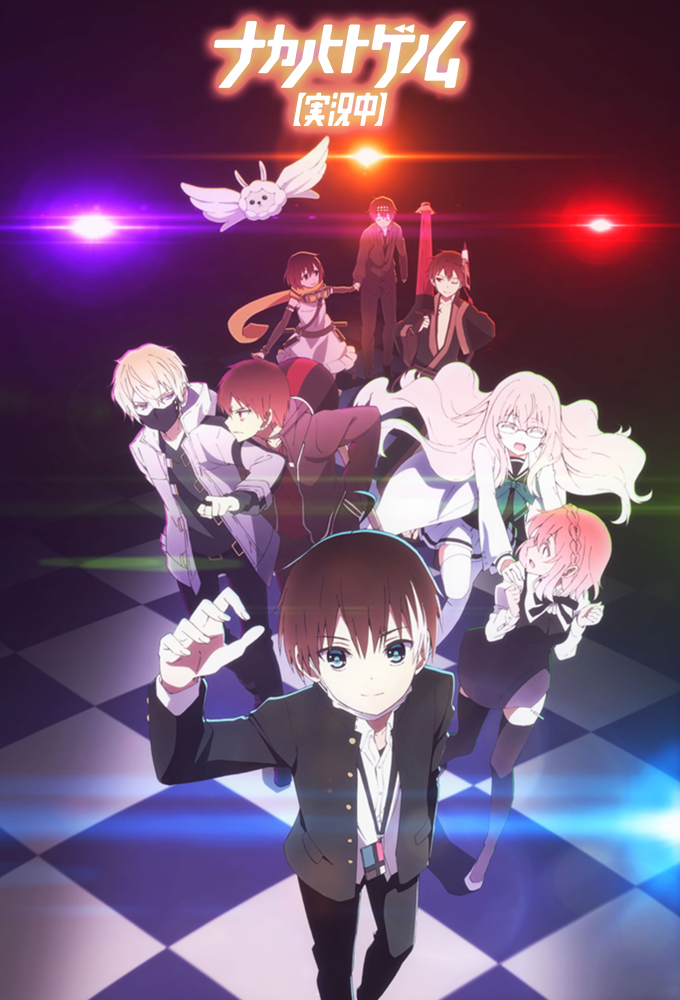 A survival game is a very common plot in the anime universe. Shows like Sword Art Online, Mirai Nikki, BTOOOM!, and the more recent Darwin’s Game are some that come to mind. Nakanohito Genome also falls under this category in a more light-hearted sense. While it’s less dangerous, that doesn’t mean the show doesn’t have any suspense at all! Underneath the fluffy exterior and fun games that the characters play through is a darker scheme. Sometimes you forget that they were all kidnapped and forced to play these assortment of games and the show does a great job of reminding you the darkness that lurks beneath.

I LOVED the artwork of Nakanohito Genome, there is the charm to the simplicity of the character designs. Of course, each of the characters had their charm points but it wasn’t obnoxious or over exaggerated and within the realm of “normal” because there has to be a middle ground with all of the abnormal things that are in the show. I mean, the “host” or “teacher” of the is a suit wearing bipedal llama. The animation is simple but the coloring and the layer of elements really made it pop without a lot of flashiness that you would normally expect with “great animation”. The composition of the scenes and the subtle movements were thoughtful full of subtle details!

There’s so much that I love about the characters that it could probably be it’s own post so I’ll try my best to keep this section short and sweet. First off, each of characters that are participating in this “game” have a certain specialty. Certain characters are good at cultivating game, others in action/fighting etc. It’s really easy to categorize them by their strengths and along with those are certain behaviors that the eventually end up being gags throughout the show. Inaba Himiko for example is great at cultivating games but is also a very shy person and resorts to flash banging the immediate area when over stressed (Exhibit A).

Oops, sorry, started blabbering there…what I’m trying to say is that the characters profile are simple to understand and as you watch the show the development is so well done that each of the characters become your favorites. The synergy of the different personalities really makes the show interesting and unpredictable, hence why I think they are the selling point of the show! Let’s not forget about Paca…our terrifying(ly cute?) Llama host. There are hints throughout the show about certain characters that haven’t necessarily come to light to the others which create this sense of tension and mystery as well!

If you thought the story and characters are the most eccentric things in this show…you’d be wrong! The soundtrack spans a wide range of genre to pair with the various activities and events that occur within the show and that’s a lot! The characters go through a variety of things from playing around with ouigi boards to a fully immersive fantasy video game! Though as those event typically only last about an episode, the tracks are limited but still impressive to see such variety, especially for a 1 cour show! You can expect genre’s like jazz, electronic pop, and even chiptune (the type of music you hear in 8-bit games!). And on top of the already vast amount of BGM for the show, are the wonderful insert songs that feature vocals from our wonderful characters plugged into each episode! If you’re new to the show, pay attention to the background music and you’ll be surprised at the little details!

I wasn’t sure how to feel about this show from the preview and the synopsis but I was completely hooked after the first episode. The diverse elements in the show sounds messy and unorganized on paper but when you see it in action, everything comes together quite well! It’s one of those shows you don’t think you need until you watch and episode and it’s game over from there!

An unexpected show with lots of surprises that you’ll never expect! Nakanohito Genome’s is like mystery box that’s, unknowingly, full of great characters and an interesting story! If you thought the trailer was boring or if the synopsis is a little too out there for you, I would highly recommend giving it the 3-episode rule! It’s an underrated show that feels new and refreshing in era of Shounen and RomCom anime!

I have a weakness for straight man type characters. Karen’s “normal” rational compared to the rest of the group’s “normal” is such a fun dynamic and that I just can’t get enough of! Not to mention Karen’s tsundere attitude and character design…it’s as if the creator was aiming for me specifically!