Posted on August 27, 2020 by KiritoNarukami 3 comments 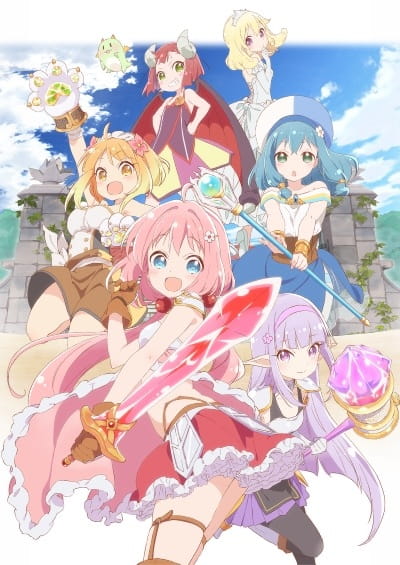 “In a world where the Demon Lord threatens the peace of the land…” is a pretty common plot that many are familiar with at this point. Though just because it’s a common setting doesn’t make the show any less interesting! Endro~! pulls from a number of well known fantasy elements such as: a Demon Lord, a Hero Party, and magic, but it also creates it own twists to these conventional aspects and creates its own unique setting. But even with it’s own twists and turns the story is still quite simple and for the most part follows our favorite hero parties and their studies to truly becoming the Hero Party and beating the Demon Lord!

With these types of show, the artwork is really simple and the animation is really intricate, don’t ask I don’t make the rules! But jokes aside, the simplicity of the designs and elements of the show allow for the actions and movements of the characters to have more articulate actions and movements. This paired up with manageable chibi scenes every now and then for the mind to rest and simply enjoy the character dialogues is a great dynamic and keeps the attention span of the audience. Overall with its pastel color pallet the art has a child’s water color art book type of aesthetic that I enjoy quite a bit!

With a simple story come simple characters as these go hand in hand. Our Hero Party as well as the Demon Lord are established quite early in the show and get tiny bits of development throughout and while it’s not much it’s enough to keep the characters and the setting interesting. Their nature and quirks quickly becomes gags such as Fai’s tendency to eat everything in sight and Mei’s unhealthy obsessions with Cartados (Endro~!’s form of magic), both which lead to a somewhat trouble problems later on. The characters do get a little deeper towards the end and thus leaves the show off with a rather satisfying conclusion.

Alright I’m going to be completely honest. If you played this soundtrack to me with zero context, I probably would’ve guess that it was from a Disney movie. It is THAT WELL DONE. This is the full package, as the soundtrack is quite packed with powerful orchestral pieces for those dramatic battle, more simple ensembles for normal day to day scenes, and some particular solo pieces for all of those funny moments throughout the show. I would highly recommend paying attention to the soundtrack as you watch the show, because when that big song comes…you’ll know!

I thought this would just going to be another cute girls doing cute things type show and I’m not entirely wrong but the twists and turns in the story plus the robust soundtrack really threw me off guard! The quality is there but I just wished there was a more serious story with fun elements sprinkled in! I wanna see a real battle with these characters!!

Pulling from a VERY FAMILIAR fantasy setting Endro~! is an original anime by Studio Gokumi. Endro~! captures your heart with a water color book aesthetic and robust track list that could easily be mistaken for a Disney soundtrack! Follow Yuusha and her party as they learn the ways of being a Hero destined to defeat the Demon Lord and save the world!

A reliable older sister type character paired with an inability to keep her room clean is a powerful force that I cannot resist. Seira single handedly keeps the team together while her teammates help keep her room together! Not to mention her straight man responses as well as her endearing personality make it hard not to like her!