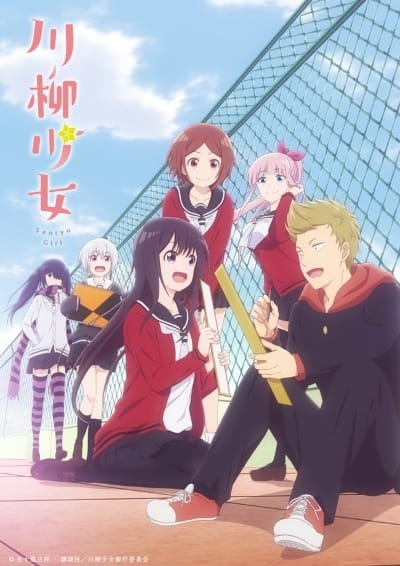 Was it cheesy that I start the review with a haiku? Well the Senryuu Shoujou is just as cheesy (but in a good way!). This precious boy meets girl story creates a fresh new approach to the romantic comedy genre. While the story of the show is straight forward, the takeaway is that it highlights the relationships between the characters and introducing new ones in a timely fashion to continue developing interest within the show. That being said, I haven’t read the source material but I assume the anime expands on the 4-koma giving us a little more than the manga did, because to be honest it didn’t feel like it was a 4-koma manga adaptation at all!

Senryuu Shoujou’s artwork is quite simple, there are some moments in the show were the animation is a bit clunky but the same can be said when the animation gets a spike in animation quality! The Pros heavily outweigh the cons in this case and as the story revolves around the communication between characters, there aren’t too many complicated movements. From skimming through the source materials, the anime character designs are a refinement of the original and I love that!

Senryuu Shoujo, ironically, has really fantastic voice acting. The meticulous care in expressing Nanako’s lines were delivered so well by Hanazawa Kana and this also applies to the other characters as well! Along with the voices the soundtrack also does very well in expressing and capturing the atmosphere of the show. Much like Nanako, the tracks are bright and cheerful, using a lot of warm sounding instruments like the guitar and piano. There are some fun tracks through in there, with odd sounding instruments to help bring out the characters panic in certain scenes.

To be completely honest, I totally bypassed this show when it was actually airing even though all of my social media was flooded with clips and screen shots from the show! And I’m glad that I decided to take a second look at this show, it’s just too darn cute! I love every second of the show and Nanako truly deserves all of the happiness in the world!

A chance encounter that would lead to a blossoming friendship (love?) that they’ll never forget. Senryuu Shoujo is a fantastic romantic comedy about a girl that only communicates in haikus and her delinquent turned poet friend. Based on a 4-koma of the same name you won’t wanna miss this one!

You know…for a girl who looks so shy…SHE’S QUITE BOLD WHEN APPROACHING EIJI! But that’s also what makes Nanako so adorable! Her assertive side paired with her shy side is a dangerous combo indeed! I understand how her dad feels…