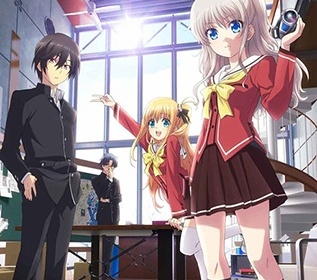 Charlotte was one of the most anticipated anime in the summer season for me and I was completely right it’s one of the best storylines I’ve ever seen. First let’s talk about the character designs, they are absolutely wonderful, there’s no complaints from me (Yusarin!!!!! :3c). The animation is breathtaking, one of the memorable moments was when Yu went to the Student Council Room for the first time and the audience’s perspective did a panoramic spin around the entire room or when Yu was being chased by the student council and Takajou tackled him into the air. Charlotte is one the few anime that have architecturally designed buildings, the one you see the most is the School that Nao and friends attend. That really gets my blood pumping because for those of you that don’t know I’m currently in architecture school , and I plan to bring my architecture degree into the anime industry and make backgrounds more lively! But now to the story!!! Yu is a narcissist who has the ability to take control of other people that he looks at for a few seconds. He used this ability to get himself into the most prestigious school by looking at the other students tests for the right answers. But he soon finds out that he isn’t the only one with an ability. There is a school that looks for those that have special ability and protects them from scientist or researchers that might contain them and use them as testing subjects. Jun Maeda really outdid himself on this one, the story was breathtaking from start to finish, a lot of drama and cliffhangers that really make you beg for more. I was slightly disappointed at the ending, I feel like it could’ve been a little more emotional build up but for 20 minutes I think they did a pretty good job. I’m really excited to see what Jun Maeda comes up with next, because you know I’ll watch anything by Jun Maeda XD.