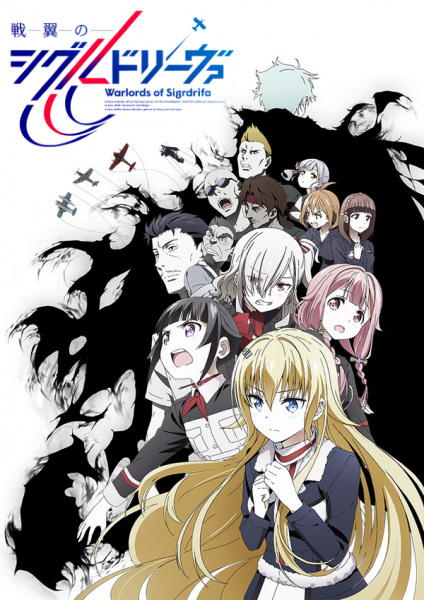 Senyoku no Sigrdrifa first came to my attention when they talked about it on Aniplex Online Fest. An original story by A-1 Pictures is always a promising thing to see. The premise was pretty vague at the time of the online convention but it was interesting enough! Let’s dive in!

There’s a lot of different story elements going at once. First off, the Pillars that threaten the existence of the planet Earth which we, as the viewer, still don’t have a good grasp of what exactly they are and what the creatures that it produces are. Second is the existence of the Valkyries, more specifically the daughter of Odin, Claudia. As the shining light for humanity there’s a heavy weight that comes with it, though how is one selected or granted the power of the Valkyrie? And finally the airplanes that the Valkyries use compared to the military. The Valkyrie aircrafts are much older models (something you’d see in WW2!) whereas the “regular” planes are more modern and sleek. A lot of very different aesthetics are clashing and I’m not sure it’s working perfectly just yet. It’ll take some getting use to and there’s no telling how it’ll all come together later in the story.

I know I mentioned eye catches not being very popular and now all of a sudden all the shows have eye catches lol. But regardless, I love the art style and hope that there will be more in the coming episodes!

A-1 Pictures character designs are wonderful and the artwork and animation are also one of my favorites. The variety of character personalities, backed up with the a fantastic voice cast, it’s really hard not to like them all!

I say, yes, that you should watch this even though at beginning I talked about the scramble story elements. The foundation of a good anime is there and it’s on track to be a really good show, as long as the story begins to converge and lay out everything in front of us as it continues. The the execution is going to be the make it or break it for Senyoku no Sigrdrifa. There has been weirder plot lines and I have a gut feeling that this one will turn out to be one of the better unorthodox stories.