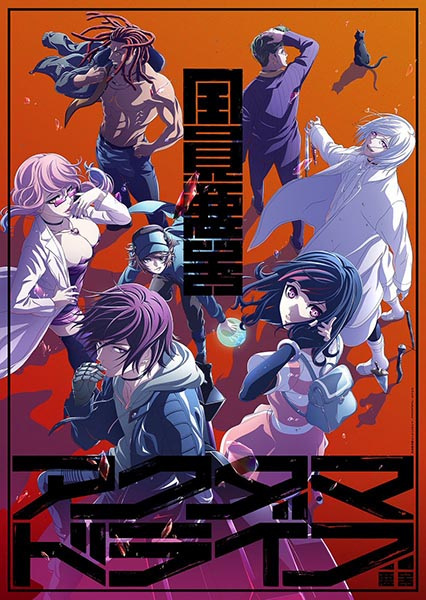 A common saying but I think it rings true in these few screen shots, “Actions speak louder than words”. With only two lines from our unlucky protagonist, the scenery just explains itself throughout its own artwork. This cyberpunk aesthetic is strong and is also accompanied by the signature style that Rui Komatsuzaki brought to the Danganronpa Series. It makes for a rather impactful and dynamic setting!

It’s really interesting to see the outlandish characters that inhibit this chaotic cyberpunk word and of course that signature Danganronpa style is very apparent. And notice that the characters don’t have a name but rather a title that we, as the audience, refer to them as. We can assume the cast will stay rather small, not too different from Goblin Slayer, as the more characters there are with generic names like Doctor/Hacker etc. the harder it is to keep track of them.

Can we talk about this neon coloring aesthetic that is plastered throughout the episode? I can’t get enough of the color palette, the character design, and the facial expressions in each scene. And I actually don’t mind the CGI throughout the episode, (surprising I know!). The way it all balances out, proportionally, compositionally, and aesthetically is just a cool to see despite the chaos it inevitably creates.

What’s wonderful about Kodaka-san’s writing is the amount of chaos that he creates in the story, yet there are elements that pull everything together into one cohesive piece. In this case, the Akudama are these infamous criminals that are competing to complete a certain goal in hopes of gaining a large sum of money. The chaos is created through the environment and eccentric characters where as the piece that holds the pieces together in the “goal” in mind. If I were to compare it to music…it’d be something like Math Rock. If you listen to Math Rock, it’s all over the place, yet there’s still something that can get you into it’s groove. There’s a fine line between sloppy writing and ingenuity and Kodaka tends to hit the ingenuity mark where others can’t.

*Side Note: For anyone interested in what “Math Rock” is you’ve probably already heard of a few songs already if you watch a lot of anime. One popular example is Asphyxia by Co shu Nie (the opening theme for Tokyo Ghoul:re). And for a more indie and true form of math rock, I recommend checking out tricot’s AudioTree set which I’ll leave below!

YES YES YES. I can’t say it enough times! The cyperpunk setting in conjuction with the dark and sinister Danganronpa aesthetics blends seamlessly in a chaotic yet cohesive plotline (wow that was a lot of words…). I haven’t seen a lot of love for Akudama Drive so I’ll take up the torch! You don’t want to miss this one, it’s going to be one of big one in this Fall season!