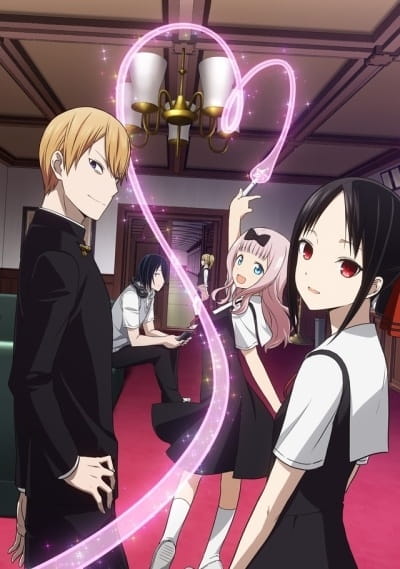 “Kaguya Shinomiya and Miyuki Shirogane are two geniuses who stand atop their prestigious academy’s student council, making them the elite among elite. But it’s lonely at the top and each has fallen for the other. There’s just one huge problem standing in the way of lovey-dovey bliss—they’re both too prideful to be the first to confess their romantic feelings and thus become the “loser” in the competition of love.” –Kaguya-sama wa Kokurasetai: Tensai-tachi no Renai Zunousen (manga)

Easily one of the most popular romantic comedies this year, Kaguya-sama wa Kokurasetai (Kaguya-sama) brings something new to the table with its over exaggerated characters and comedy. I’ll be honest, the narration was excessive at the beginning but calms down as the show goes on. One of Kaguya-sama’s strong points is its wonderful composition. The different perspective of the characters throughout the show creates a unique dynamic that only Kaguya-sama’s can deliver.

While simple most of the time, the art of Kaguya-sama is very comedic and dramatic. Pulling from the source material, there’s a manga aesthetic in the art through the composition creating more intimate or comedic moments. Having said that, let’s not forget about the Chika ending that blew up the internet. The articulation in each of her movements it’s plain to see that animating the ending alone took a substantial of work and should be applauded!

This is the thing I love the most about Kaguya-sama, the soundtrack, out of context, sounds like a 90s Japanese classic Pop collection. But given that these iconic sounds and the situations that they are associated with throughout the show make the soundtrack turn a whole 180 making anyone who’s seen the show explode into pure laughter.

I didn’t enjoy Kaguya-sama at first…but it really grew on me. The pure comedy and the frustration of the characters created such a good dynamic that kept me coming back for more and more. It’s going to be hard to top a love comedy like this, in my opinion.

Kaguya-sama wa Kokurasetai is a love comedy that you won’t want to miss. With an eccentric cast of characters, excellent soundtrack, and dramatic art it’s hard to not crack a couple of giggles while watching the show.

As the wildcard throughout the show, Chika creates opportunities and steals them just as quickly! As oblivious as she is to this war that is occurring right under her nose, her love for her friends and the comedic relief that she brings to the show are unmatched.

P.S. Have you seen that Chika ending!?

tagged with Anime review, かぐや様は告らせたい～天才たちの恋愛頭脳戦～, Kaguya Wants to be Confessed To: The Geniuses' War of Love and Brains, Kaguya-sama wa Kokurasetai: Tensai-tachi no Renai Zunousen, Kaguya-sama: Love is War, Kiritoreviews