Posted on August 24, 2019 by KiritoNarukami 2 comments 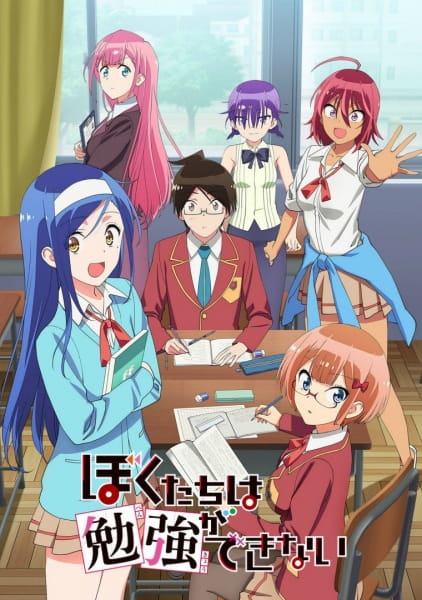 Story:
Bokutachi ga Benkyou wa Dekinai’s, or BokuBen, story is straight forward as they come. Yuiga needs to tutors his classmate so that he is able to get the scholarships he so desperately needs. That is the overarching plot point and in between are fun tutoring sessions and activities that the study groups partake in with a hint a romantic development, of course! It’s fun, enjoyable, and easy to watch.
Artwork & Animation:
The opening is one of the most beautifully crafted openings I’ve seen in a while. I love the composition and color palette of the show, it gives off an easy-going vibe with fun manga-esque art. Though slightly simplified, the character designs translate very well from the manga to the anime. The background art is also vibrant and full.
Character(s):
The characters are definitely the selling point of the show, the unique heroines and our intelligent yet dense protagonist. BokuBen does a good job of keeping all the characters relevant at all times, even if it’s a small cameo on an episode. The timing and development is great spanning between characters and events while still focusing on the group synergy between them all.
Sound (OST & Voice Acting):
I wasn’t expecting the soundtrack for this show to be as articulate and aesthetically pleasing as it actually is. The wonderful compositions and the choice of instruments create a nice environment and aesthetic, in which the story and artwork compliment creating a fantastic anime.
Enjoyment:
I loved this show a lot, even more than I thought I would. The art, characters, and soundtrack came together well and I’m looking forward to another season!
Overall: Score

Bokutachi ga Benkyou wa Dekinai is a wonderful story of studying, even if it’s not your strong suit. The simple overarching plot mixed with fun and eventful activities that the study group partakes in will have you laughing until your stomach hurts.

Best Girl: Kirisu Mafuyu
Another extremely hard decision, but I enjoyed every single one of the girl but Kirisu Sensei had me laughing the most. The strict and stern teacher but is actually a clumsy, messy, easily scared young lady creates a moe gap that I couldn’t resist. But while she is strict she is actually doing it for her students and what’s easiest and best for them, even if it doesn’t seem that way.