Posted on May 7, 2017 by KiritoNarukami 5 comments 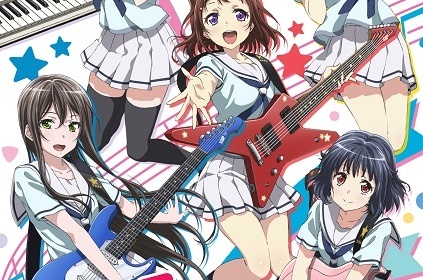 “Since she was very young, Kasumi Toyama has always been searching for the “Star Beat”, a sparkling and exciting sound she heard while looking up at the night sky. Just after getting into high school, Kasumi comes across a “star-shaped guitar” in the storage area of an old pawn shop. Feeling a rush and excitement she has never felt before, Kasumi teams up with four other girls and embarks on a journey to seek out the shiny place. We promise to perform a live here!” -Official Website

I came into BanG Dream expecting an oversexualized girls band type setting, I came out a huge fan of both the anime and the game. BanG Dream turned my expectation upside with its great soundtrack and story, as well as connecting the anime back to the game and continuing with LIVE SHOWS, that feature the voice actors playing their characters respective instruments! The BanG Dream project is the first of its kind combining game, anime, and live performances!
————————————————————————-
Story:
As mentioned above, the anime is actually a prequel to a mobile game, BanG Dream: Girls’ Band Party, which focuses on Poppin’ Party, one of five bands featured in the game. The entirety of the anime is based on Poppin’ Party’s origin story, and the game continues off of that. As for the other bands, they do make cameos here and there but you have to look for them as they are in the background characters. The game features the origin stories for the other bands (Afterglow, Roselia, Pastel*Palettes, and Hello, Happy World). So after playing the story, I was able to appreciate the story in BanG Dream a lot more, due to the familiarity to the songs that were performed in the anime, as well as the small cameos the other band members made throughout the show. Alright but back to the actual story, the story itself is somewhat predictable and cliche. The main character gets a spark of inspiration and then ventures out to gain band members to perform on stage and in the end, they perform on the stage. I did enjoy the arcs for each girl (Saya being the most heart-breaking) but I wish there was a little more kick to it.
Artwork & Animation:
Compared to the game, the artwork and character design are toned down quite a lot. Which is a disappointment, the artwork in the game is EXTRAordinary and anime is just, well, ordinary. One thing I did enjoy, was the live performances! As a fan of 2D animation for performances, I actually enjoyed the use of 3D animation for the live shows, there were slight deformations in the 3D characters, but it wasn’t that bad.
Character(s):
As for character development, Xebec did a pretty good job at giving everyone some depth as a character and making everyone likable, but some characters stole the show (Saya and Kasumi) compared to the others. I wanted to see the other band members perform on the stage with their respective songs! As a player of the game, I’m a HUGE fan of Roselia, and I was waiting for the entire show to see them perform but unfortunately, that didn’t happen.
Sound (OST & Voice Acting):
The soundtrack is excellent, Glitter*Green and Poppin’ Party original songs are happy and catchy but have some mean guitar and drums when you listen closely. The other bands have great songs as well but they were not featured in the anime.
Enjoyment:
I enjoyed the anime a lot more because I already experienced some of it in the mobile game if you’re a fan of rhythm mobile games I recommend it a try!
Overall: score 9
Which a mediocre story and a mildly enticing artwork, BanG Dream may get lost in the sea of anime. If BanG Dream were a stand-alone anime, I don’t think it would be as successful as it is. But with the combination of the game as well as the live performances, BanG Dream becomes a starting point for a very large fanbase! I would recommend looking into the game as well as the live performances!